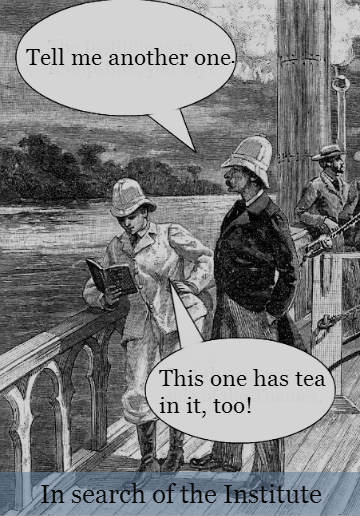 The Institute requires members to be forthright about their early shameful tea-drinking experiences. The name of the author has been removed to protect his privacy.

I blame my parents. I was an infant. I had been used to milk.

“Just put a spoonful in for him,” my father urged.

“He likes it milky,” murmured my mother seductively.

They had all the paraphernalia, too. I remember a small but solid silver tray, a striped blue and white teapot, with matching blue and white cups. The milk jug, of the same design, looked to me like a small ship floating on the tea tray’s silver surface. The sugar bowl was made of crystal, which made it somehow regal: a cut above the rest of the inhabitants of the tray.

I soon graduated from milky tea. I expect that I just couldn’t get the same feeling. I started drinking it stronger.

How was I influenced? Some say it was peer pressure. I wasn’t the only one. Other children drank tea. I had seen them. Even their scandalous mothers would ask me if I wanted a cuppa. Some of the more depraved even had tea parties.

I know. I was about eleven when I was invited to one of these by a girl. I didn’t know what to expect. I didn’t know a lot about girls. I did know she was a friend of the two twins, one of whom liked to snatch my cap, and then would demand a kiss to get it back. I found this all rather embarrassing.

The adults had the stuff right there at the party. It was in industrial-strength teapots. There were cakes and little sandwiches, too. You can spot tea drinkers by the sort of sandwich they make. If you encounter dainty little cucumber sandwiches with no crusts, you can be sure a tea drinker made them.

A system of disorientation is used to get the young to drink tea. At the paper-hatted party, we were blindfolded and made to smell different foods in jars and guess what they were. After that ordeal, I was jollied into a game of spin-the-bottle. By then, all of us were so discombobulated that our resistance to tea, and cake, had been exhausted. We drank. We were merry.

But that strong masculine brew has its dark side. I am so drawn to a mental image of a hot cuppa that it can raise me from morning slumber. One wobbly foot in front of the other, I lunge towards the siren call of a kitchen cup of tea.

COOKIES: The International Institute of Not Doing Much does not sell your information. Please click ACCEPT to accept all or manage your preferences.
MANAGEACCEPT
Manage consent

This website uses cookies to improve your experience while you navigate through the website. Out of these, the cookies that are categorized as necessary are stored on your browser as they are essential for the working of basic functionalities of the website. We also use third-party cookies that help us analyze and understand how you use this website. These cookies will be stored in your browser only with your consent. You also have the option to opt-out of these cookies. But opting out of some of these cookies may affect your browsing experience.
Necessary Always Enabled
Necessary cookies are absolutely essential for the website to function properly. This category only includes cookies that ensures basic functionalities and security features of the website. These cookies do not store any personal information.
Non-necessary
Any cookies that may not be particularly necessary for the website to function and is used specifically to collect user personal data via analytics, ads, other embedded contents are termed as non-necessary cookies. It is mandatory to procure user consent prior to running these cookies on your website.
SAVE & ACCEPT